The Story of Cascade Hops

Did you know that one of the most popular hops for brewing beer was developed in the Pacific Northwest?  Cascade hops are used by breweries worldwide, and consumers love the beer for its citrus flavor.  In fact, Cascade hops are frequently used in the production of American Pale Ales and West Coast IPAs.  However, the story of how Cascade hops came to be is an interesting bit of trivia for any beer enthusiast. 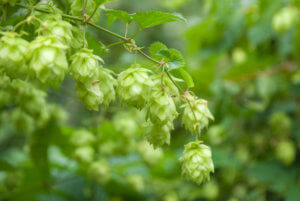 The history of Cascade hops:

Oregon has been home to hop farming since the 1860s.  Most of the varieties were bitter, and the most prevalent was called “Cluster.”  Because Cluster didn’t have much aroma, brewers would add flavor by including more hops imported from Europe.  Obviously, this wasn’t the freshest or most economical ingredient for local beer.

After prohibition ended, the US government wanted to grow the American beer industry, so they reestablished a program through the USDA to improve hop growing in Oregon.  The program was housed at Oregon State University.  Their primary goal was to breed hops that would remain healthy in moister conditions.  The Downy Mildew blight was a constant threat to the Cluster crops, which made up 90% of the hops grown in Oregon.

Along came Dr. Stanley Brooks.  He bred a hop variety from English Fuggle and Russian Serebrianker that was able to withstand the climate and resist disease.  There wasn’t much excitement at the time, and it was named USDA 56013.  However, people recognized that not only was the hop disease resistant, but it also had an aroma similar to the hops that brewers were importing from Europe.  In 1967, the USDA gave permission to grow a small crop of USDA 56013.

Unfortunately, not much happened with USDA 56013 for a few years.  In 1972, USDA 56013 was named “Cascade” after the stunning mountain range in Oregon and was released for public consumption.  One major brewing company was ready to try it out.  Coors purchased the hops and tried using them for one of their formulas.  It turned out that the hops were a bit too strong for the light taste of Coors, but it brought attention to this new variety of hops to other brewers.

In 1975, the Anchor Brewing Company first used the hops commercially, and they continue to produce Liberty IPA today.  They produced the original 1975 brew to commemorate the 200th anniversary of Paul Revere’s midnight run. Soon more craft brewers started ordering the hops and the resulting beers were a hit with their consumers.

Many American craft beers use Cascade hops because of their taste.  You’ll notice pine, citrus, and floral undertones with moderate bitterness.  In fact, many consumers describe the taste as “grapefruity.”